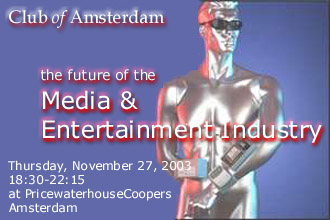 19:30
Welcome by our Host Jonathan Marks, Director, Critical Distance BV
Jonathan Marks gives a brief overview of the state of the industry – and the extent of the challenges it is facing. He will also launch the motion for the debate.

and our Host Jonathan Marks
The panel is followed by an open discussion.

ADDITIONAL FUNCTIONS
Since 2001:
member of the Board of Nieuw Akademia, a non-profit collective of scientists, artists and consultants www.nieuwakademia.nl
Since 2003:
consultant to Premsela, Foundation of Dutch Design www.premsela.org

Gerd Leonhard (42), is a musician and producer, writer, strategic adviser and music business entrepreneur. Originally from Germany, Gerd spend almost 20 years in the U.S., working in the music industry, and now resides in Basel, Switzerland.

1996-2002, during the heydays of the Digital Music and dot-com years, Gerd was the founder and President & CEO of LicenseMusic.com, a company that revolutionized the B2B music-licensing space by inventing a web-based software product (and online marketplace) that reduced the average transaction time for music licenses from 6 weeks to 2 hours. LicenseMusic counted thousands of clients in the Film, TV, Advertising and New Media industries, worldwide, including Disney, McCann-Erickson, Paramount Pictures, Saatchi & Saatchi, and Fox TV.

As a musician and composer (guitar), Gerd won the highly acclaimed Quincy Jones Jazz Masters Award which allowed him to attend Boston’s Berklee College of Music and, in 1987, graduate with a diploma in Jazz Performance. Gerd has appeared on many recordings, concert bills and instructional videos, and has toured internationally, including some opening engagements for major acts such as Miles Davis. As an event producer, Gerd served as the Executive Producer of the pan-European talent event EuroPopDays, in Freiburg / Germany , which featured over 200 showcases with new bands and unsigned artist, sponsored by the European Commission and covered by MTV Europe.

Gerd served as an Expert Adviser to the European Commission in Brussels, Belgium, in 1993-1996, as Senior Adviser to the London-based Rightscom Ltd, currently sits on the Advisory Board of the Music Business Management Division of Westminster University (London), and has consulted dozens of start-ups and SMEs in the music and technology sectors, both in Europe and the U.S. Gerd also works with venture capitalists and financial services companies in discovering interesting investment opportunities in the media-technology business.

Gerd is a very active writer (look for a new book to be published in early 2004), speaker and strategic adviser, and has been quoted in Billboard, Variety, the Hollywood Reporter, the San Francisco Chronicle, Business2.0, the WSJ and Wired. He publishes his music business visions at www.thefutureof.net, a think-tank site that has been syndicated to hundreds of websites around the globe. Gerd is also the Founder of www.musicentrepreneurs.com, a network platform for entrepreneurs in the music business.

Gerd has spoken, moderated and presented at dozens of music industry events, including Webnoize, MIDEM, MILIA, Gartner Conferences, Streaming Media and the Content Summits; and has lectured at Berklee College of Music, UC Berkeley, University of Miami, City University London, University of Colorado, and many others.

Gerd speaks German, English, and French, and, on a good day, a little bit of Spanish and Italian.
http://www.gerdleonhard.com

Monique van Dusseldorp is the founder of Van Dusseldorp, a new media consultancy, and the founder of Europemedia.net, a news service about European new media developments. As the CEO of Van Dusseldorp & Partners, she initiated the highly succesful TV meets the Web and SMS meets TV seminar series, and amongst others published the report “SMS TV – Interactive television reinvented” . Van Dusseldorp is a board member of Dutch broadcaster NPS, member of the board of Kenniswijk, and secretary to the Board of the Filmmuseum, and a valued speaker at international media conferences.

Jonathan Marks (45) was born in the UK, but has spent most of his working life “abroad”, 22 of those years in The Netherlands. After working in Austria and Britain, Marks settled in Hilversum, Holland’s centre for broadcasting. There he quickly built new audiences for Radio Netherlands’ English language service by producing science and technology programmes. Marks held several functions at Radio Netherlands, including eight years as Programme Director. “I was originally hired to turn a media programme into a science show. But I ended up developing both concepts into long-running radio series that brought in excellent reactions from all over the world. Since then, setting up satellite television and new media projects in Latin America and Africa have been the most challenging work.”

Since leaving Radio Netherlands in September 2003, Marks has set up his own business, Creative Media Consultants. “As a media detective, I know that some of the best ideas for reaching people are coming out of the developing world. I enjoy acting as a catalyst, giving leadership to ensure new projects really happen. My new company gives me more time to pursue projects with a purpose. Right now, using mass media to reach hearts and minds has never been more important” says Jonathan. For many years he has been a frequent and impassioned speaker at media conferences, notably gatherings of the Asian Broadcasting Union, PRIX EUROPA and the European Broadcasting Union as well as London based Commonwealth Broadcasting Association. “.

Reading, astronomy and being father to three kids fill in the gaps between Jonathan’s media assignments.
http://www.jonathanmarks.com