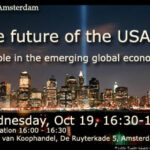 Club of Amsterdam pdf version SupportersKamer van Koophandel - Netherlands Chamber of CommerceSyntens Richard Huff Economic Counselor, U.S. Embassy The U.S. and the Emerging Global Economy "Good Globalization - Getting There from Here" Since the end of the Second World War, global economic integration has helped to bring unprecedented increases in wealth and income and has … END_OF_DOCUMENT_TOKEN_TO_BE_REPLACED