The Club of Amsterdam presents at the Amsterdam New Media Institute:
Media & Technology

This year Windows Media Center will be available for the Dutch market. Windows Media Center enables you to record and replay TV and music or to watch your photos. The PC and Internet now reach the living room. But the Windows Media Center’s features are richer and its implications bigger. You now can record TV programs and later watch them excluding commercials. Is this the end of traditional advertisement? Is this going to be the big threat for cable companies? 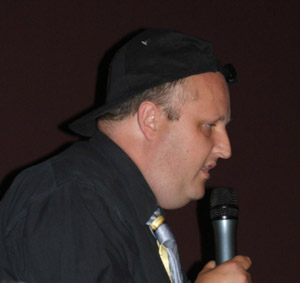 Jonathan Marks (45) was born in the UK, but has spent most of his working life “abroad”, 22 of those years in The Netherlands. After working in Austria and Britain, Marks settled in Hilversum, Holland’s centre for broadcasting. There he quickly built new audiences for Radio Netherlands’ English language service by producing science and technology programmes. Marks held several functions at Radio Netherlands, including eight years as Programme Director. “I was originally hired to turn a media programme into a science show. But I ended up developing both concepts into long-running radio series that brought in excellent reactions from all over the world. Since then, setting up satellite television and new media projects in Latin America and Africa have been the most challenging work.”

Since leaving Radio Netherlands in September 2003, Marks has set up his own business, Critical Distance. “As a media detective, I know that some of the best ideas for reaching people are coming out of the developing world. I enjoy acting as a catalyst, giving leadership to ensure new projects really happen. My new company gives me more time to pursue projects with a purpose. Right now, using mass media to reach hearts and minds has never been more important” says Jonathan. For many years he has been a frequent and impassioned speaker at media conferences, notably gatherings of the Asian Broadcasting Union, PRIX EUROPA and the European Broadcasting Union as well as London based Commonwealth Broadcasting Association. “.

Reading, astronomy and being father to three kids fill in the gaps between Jonathan’s media assignments.
http://www.jonathanmarks.com

Derk Wagelaar
Microsoft Nederland
Derk Wagelaar is responsible for introducing Windows Media Center in The Netherlands. He will make a demonstration and tell what new developments can be expected.
http://www.microsoft.com/netherlands/default.aspx