Ton Dietz about the future of Developing Countries

about the future of Developing Countries

Ton Dietz about the future of Developing Countries 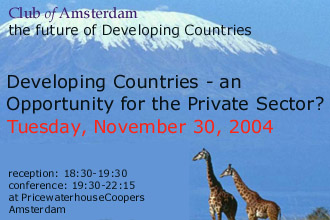 About the future of Developing Countries

“In this paper, we employ the notions of digital inequality and digital divide to describe two levels of access to Information and Communications Technologies (ICTs). On the one hand there is the inequality of access to the cluster of technology measured by Internet use intensity and on the other are the confluence of skills and other resources that differentiate countries in sub-Saharan Africa. Using cross-country data, we test hypotheses developed from a review of the literature from which we draw preliminary conclusions on the nature and pattern of digital access in the region. The variables are analyzed through a simultaneous equation system because the high correlations ruled out the use of a single econometric model. The paper confirms the vital importance of telecommunications infrastructure – represented by the high correlation of telephone density – with Internet use, no matter the per capita income level of a country.”

Reporting an exploratory study, this paper looks at how traders and processors of grains and horticultural produce in Asia finance their marketing activities and how they use that finance.

The paper concludes that lack of working capital is probably not a major constraint to the functioning of agricultural marketing systems in Asia. Nevertheless, millers, in particular, do appear to experience problems in accessing investment capital. A feature of most agricultural marketing systems is the existence of many vertical financial linkages, pivoting around millers in the case of grains and wholesale market traders in the case of horticultural produce. The paper concludes that such linkages seem to be generally non-exploitative and serve mainly to secure supply, guarantee markets and reduce transaction costs.

Bank lending to the trading sector is constrained by lack of collateral and by the fact that traders often face immediate needs for cash that are incompatible with slow bank procedures. The paper considers ways in which banks could make their products more attractive to traders and proposes further research to increase our understanding of the financial needs of those involved in agricultural marketing and primary processing.

Energy conservation in focus
A dozen Chinese city mayors and their representatives came together to explore ways of tackling the traffic congestion and excessive energy consumption suffocating city development.

They consume 30 per cent of the total energy in China, a percentage in keeping with its increased urban acceleration.

The average energy consumption of buildings in China is up to three times that of those in developed countries. Should the current situation continue, China will not be able meet energy demands, he said.

“The buildings, compared to the industrial and transportation sectors, have greater potential to save energy at lower costs,” said Xu.

Even by replacing existing lights with energy-saving bulbs, China can save the equivalent amount of electricity generated annually by the Three Gorges Dam Project, the world’s largest hydropower project.

FeliCa
i-mode FeliCa is a new service made possible by the synergy of two platform technologies: NTT DoCoMo’s mobile Internet service, i-mode, and Sony’s contactless IC chip technology, FeliCa. FeliCa’s speedy and secure data transmission technology was combined with i-mode, which enables communication wherever the user may be. As a result, a handset becomes a mobile tool for convenient new uses, serving as e-money, credit card, ticket, or even house or office key.

Summit for the Future 2005: Healthcare

Development As Freedom
by Amartya Sen

By the winner of the 1988 Nobel Prize in Economics, an essential and paradigm-altering framework for understanding economic development – for both rich and poor – in the twenty-first century.

Freedom, Sen argues, is both the end and most efficient means of sustaining economic life and the key to securing the general welfare of the world’s entire population. Releasing the idea of individual freedom from association with any particular historical, intellectual, political, or religious tradition, Sen clearly demonstrates its current applicability and possibilities. In the new global economy, where, despite unprecedented increases in overall opulence, the contemporary world denies elementary freedoms to vast numbers – perhaps even the majority of people – he concludes, it is still possible to practically and optimistically restain a sense of social accountability. Development as Freedom is essential reading.

Their common goals: preservation, distribution and utilisation of heirloom varieties and old local varieties of vegetables, field crops and fruit.

1989: First catalogue of seeds, a cooperation of 30 members of Arche Noah. 2004: Sortenhandbuch (handbook of heirloom varieties), containing over 2.000 varieties, perserved by 150 members.