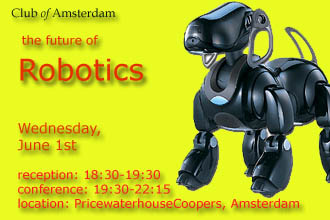 “A few hundred kilometres above us, outside the thin layer of gas we call atmosphere, lies a hostile environment we commonly refer to as space. Robots may be more adapt than humans to survive out there, although it is no easy task to make sure that such a complex system will work flawlessly for many years without maintenance. The lecture will introduce the European Robotic Arm (ERA), a major development in space robotics, developed by a consortium of European companies, with Dutch Space as the prime contractor. ERA will assist human astronauts in their activities on the outside of the International Space Station. Extrapolating from ERA, one can wonder about the future of Space Robotics: will robots be limited to assist humans, used to extend human capabilities and reach or replace humans?”

“The AIBO was developed by Sony as an entertainment robot and modeled as a dog. The AIBO has multimodal input and output. The robot is able to sense his environment by a camera, sound and touch sensors. The AIBO is able to walk, turn around, make sounds and show flashing lights and a lot of other behavior. The “mind” of the dog is resident on a memory stick. This intelligent module relates the input patterns to the output behavior patterns. Sony offers a programming platform to develop personalized, intelligent, emotional robots. At TUDelft there is a project running on the development of new types of AIBO robots such as a companion robot, rescue dog, watch dog and AIBO as a soccer player. Our goal was to develop a new mind for the different types of AIBO robots with amore complex personality model including emotions and moods. We took into consideration the realities concerning an emotionally intelligent AIBO, that acts in an unpredictable and changing environment. We developed an architecture based on the existence of another architecture developed in the URBI project at ENSTA. We implemented these architectures on the AIBO. Another option is to run the software on a computer wireless connected with the AIBO.
We will present the different types of AIBO models and give some demonstrations.”

“Progress in the area of robotics will ultimately depend on how intelligent we can make the robots. Recently, enormous advances have been made in the area of robot mechanics, sensors and batteries. This has made it possible to build robust and accurate robots. Without improvements in robot behaviour and control, however, these robots will not be usable in more complex human environments. In order to use robots in everyday situations they will need to have better perception, more intelligent behaviour and better skills in interaction and communication with humans. These are the areas that artificial intelligence investigates and a lot of research effort is invested in building more intelligent robots. At the same time, the study of (artificial) intelligence can benefit from work on robots. In order to make a robot perform intelligent behaviours, many subtasks need to be solved that shed light on what exactly human intelligence is. This talk will give an overview of the contributions that AI has made to robotics (and robotics has made to AI), the techniques that are used and the challenges that are still open.”

“The real challenge for robots is to interact with humans. Creating robots that fit into our society, that are polite and gracefully communicate with humans is the next step for robotic research. The results of artificial intelligence, affective computing and dialogue management need to be integrated integrated in ongoing projects. Special attention needs to be paid to the cultural aspects to make human-robot interaction successfully.”

Bart de Boer: Robotics for AI and AI for Robotics

Cock Heemskerk received an M.Sc in Mechanical Engineering from Delft University of Technology in 1985, and a Ph.D. from Delft University of Technology in 1990. In 1985-1986 he spent a year as visiting Scientist at the Carnegie Mellon University Robotics Institute in Pittsburgh, PA, USA. He has been at Dutch Space since 1990, working on various space robotics projects, in various roles. He is one of the main designers of the European Robotic Arm (ERA).
http://www.dutchspace.nl

Dr. Christoph Bartneck is an assistant professor in the Department of Industrial Design at the Eindhoven University of Technology. He has a background in Industrial-Design Information Science and Human-Computer Interaction and his projects and studies have been published in various journals, newspapers and conferences. His interest lay in the area robotics, multimedia creation and research on social interaction between humans and artificial characters. He worked for several companies including the Technology Center of Hannover (Germany), LEGO (Denmark), Eagle River Interactive (USA), Philips Research (Netherlands) and ATR (Japan).
http://www.bartneck.de
http://www.ai.rug.nl