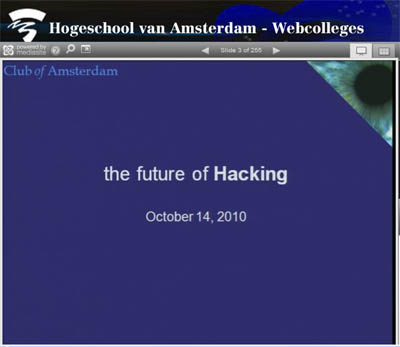 The term ‘hacking’ to most people refers to either Russian criminals stealing your creditcard or Chinese spies breaking into NATO. For those who call themselves hackers ‘hacking’ means the creative use of technology to do new and unexpected things. Thank old-media for this confusion.

In our hight-tech society of 2010 the realities of internet crime, electronic warfare and using technology creatively are both much more mundane and sometimes much more spectacular than portrayed in movies such as ‘The Net’. Windows is still crap but people keep buying it while alternatives exist.

Meanwhile Wikileaks manages to run circles around the mightiest military in the history of the planet but despite this the wars still go on. Hacking changes a lot, but not always were we expect it.

What used to be the Star-trek communicator is called a smartphone now so the future of hacking might just be a lot more interesting than any old ’90’s science-fiction.

Will The Police in Future be able to catch the bad guys. What are the possible problems. What is the International perspective. Traditional crimes in a country with boarders vs. crimes in a digital world without borders. What does that mean for Law Enforcement in the world. We will take a look into the technical problems involved witch possibly occur if you want to fight Hackers in the future. What kind of privacy problems will occur. What kind of privacy invasive measures are still acceptable for society.

Martijn Aslander, lifehacker, connector and resourcerer
How to connect hacking with the possibilities of the network and information age

Martijn just wrote a book, title ‘Easycratie’ which is about how to organise in the network age. It covers pay-what-you-want, lifehacking, the age of acces and lots more…. in his presentation, Martijn will try to connect a lot of thinking from the hacking world with the future of organising.

The Internet of Things is an abstract term for something that is quickly becoming real. The world is being filled with sensors and actuators, all of which are linked into systems and being fed back to us with real and virtual displays. This is changing the fabric of society and the definition of what society is. It is our responsibility as citizens of this hyper-connected world to hack our environments to work better however we can.

Martijn Aslander, lifehacker, connector and resourcerer
How to connect hacking with the possibilities of the network and information age

I’m a 38 year old exploren of the network and information age.
I’m interested in setting things in motion, to develop myself and others.
Most of my time I spend learning and thinking.
The rest of the time I engage with people and connect people.
After reading The Tipping Point, the book of Malcolm Gladwell on social epidemics, I figured out that I am a maven, a connector as well as a salesman. If you want to spread ideas and knowledge like I do, you need people with these roles.
Since 8 years now, after I figured out that asking money before an assignment is maybe not the best way to operate, I ask people to evaluate me and the value of my efforts afterwards. A path that would be much richer than the path of being a consultant that can be hired.
Richer in the sense of value to me and others, value in a much broader meaning than just money. We live in the age of access now, and access will be more important than possesion in the next decades, I think.
I love to give lectures and do that over 150 times a year, speaking about the new economy, valuecreation, marketing 2.0, complementairy economics, networking, lifehacking, and about my ideas to make te world a better place, with my insights in social and information capital.
Specialties:
Creative thinking, recognizing underlying patterns, organising, guerilla marketing, network
www.martijnaslander.nl

Alper Cugun is Intendant of Monster Swell an Amsterdam based data visualization agency where he is lead of technology and experience. He is formally educated as an engineer of Media and Knowledge Engineering but he spends more time designing interactions with a focus on mapping and games.
He started micropayment startup TipiT, helped introduce Foursquare to the Netherlands and was technical lead of PLAY Pilots. He is also an active participant in the open data and open government movements. Alper is regularly published about all of these topics.
alper.nl
monsterswell.com
tipit.to
foursquare.com
playpilots.nl

Arjen is co-founder and Chief Technology Officer of Gendo. He studied Science & Policy at Utrecht University and worked for IBM and Twynstra Gudde as IT-architect, trainer and IT-strategy advisor. Since late 2001 Arjen has been self-employed, advising clients on the strategic impact of new technological developments. He is a certified EDP auditor and information security specialist. As a much sought-after international speaker on technology policy issues he gives over 100 keynote talks every year.
Since 2002 he has been involved in formulating public IT-policy in the area of open standards and opensource for the government and public sector. Arjen advises senior managers and administrators of companies and public institutions, members of parliament and the Dutch Cabinet about the opportunities offered by open standards and opensource software for the European knowledge economy and society as a whole.
In 2009 Arjen was part of the team that organised Hacking at Random (har2009.org), a 5-day, 2500 participant techfest about all things hackable.
Besides information technology Arjen also works on scenarioplanning and strategic assesments of emerging technologies sush as bio- and nanotechnology. With clients he investigates the social, economic and geo-political impact of science and technology.
Arjen’s collumns and article’s can be found on his Gendo blog.
Dutch: www.gendo.nl/blog/arjen
English: www.gendo.nl/blogs/arjen-int