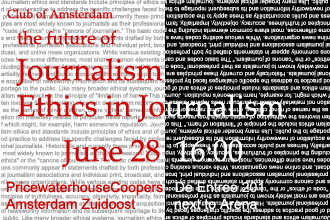 Milverton Wallace, founder/organiser of the European Online Journalism Awards
The new Corinthians versus the standard-bearers: How the web is socialising journalism ethics

James Cameron, arguably the greatest British journalist of the last 100 years, always insisted that journalism is a craft. Now “craft” implies pride in work, integrity in dealing with customers, rites of passage, long years of training to acquire the requisite skills/knowledge.

Gradually, however, journalism became “professionalised”. Aspiring hacks now need: a university or other accredited “qualification”; a government issued licence (except in the Anglo-American world); to belong to a recognised association and to obey its rules of engagement and code of standards in order to practice and earn a living as a journalist.

This “professionalisation” has turned journalism into an exclusive club with a privileged membership. And so, as with all such associations, members are/can be punished and/or excluded if they break or dishonour the rules and codes.

Today, this carefully constructed edifice is crumbling as the read/write web blows away the need to be a member of any of the exclusive clubs to be able to practice journalism. Now that the “authorities” can no longer decide who is or isn’t a journalist, who will enforce the rules and codes? What is to become of them? And, do we still need them?

Digital media , and in particular, it’s social offsprings — social media such as blogs, vlogs, wikis, IM and social networks such as MySpace, Facebook, Friendster etc — have enabled the amateurisation of the media.

So we’ve come full circle: from 17th/18th century amateurism, to 19th/20th century professionalism and back to amateurism in the 21st.

We use “amateur” in the original and noble sense — someone or an activity motivated by love. And therein lies the problem. Amateur ethics, motivated by love, crashes against professional ethics, driven by gain. Can they be reconciled?

Guy Thornton, Chair, Netherlands NUJ Branch
Does and should journalism have boundaries and if so where and how should they be drawn?

Journalism is broad church ranging from news reporting and the serious investigative to self-congratulatory columnists masquerading as semi-serious comment and the frivolous, frothy, light hearted verging on the borders of fantasy.

Add to this the changing face of journalism with the conventional mainstream media challenged by the new breed of do-it-yourself journalism via blogs and like, never mind the conventional journalist faced with the growth of citizen journalism and management/editors happy to take what they can get for free or a pittance rather than paying a realistic price.

What can be done to ensure stories are not embellished or even fabricated? Where should the boundaries be drawn between public interest and private intrusion? How far can a journalist go and is there a boundary to responsibility? Should the media be allowed to publish whatever they want, such as the Mohammed cartoons, never mind the consequences?

Neville Hobson, Communicator, blogger, podcaster
The age of gatekeeper journalism is over

With the rise of social media like weblogs enabling anyone with an internet connection to voice their opinion, so-called citizen journalists are becoming new types of reporters, columnists, editors and publishers, building micro-audiences who eschew The Establishment. While not every blogger is a journalist, a new style of journalism is emerging as many in the mainstream media also embrace the philosophy of citizen journalism.

What does the now-future look like? When everyone has an opinion, who do you pay attention to? Who do you really trust when people generally lack trust in the media?

The mash up of indie voices and traditional media makes for strange bedfellows. Yet the evolutionary social change that’s upon us, largely driven by a mix of people’s behaviour changes and technology tools within their easy reach, means that journalism as we know it must change or die.