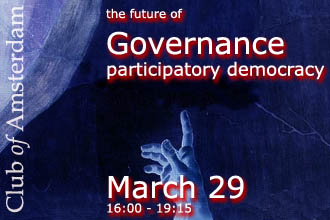 Mumbai and New Delhi are amongst the fastest growing cities in the world, and this presents the city authorities with formidable challenges. This presentation explores some of the emerging trends in urban governance. One trend is urban decentralisation: Wards Committees have been established at the neighbourhood level, to which have been delegated powers and funds for local self governance. Another trend is increased attention for privatisation and for new forms of public service delivery including partnerships between cities and (organised) citizens, for example the powerful Resident Welfare Associations in New Delhi. The question is asked what the implications of these reforms are in terms of citizen voice and democracy, for both the (growing) middle classes and the massive numbers of urban poor.

The aim of participatory democracy is individuals playing a more direct role in their own government, through lateral communications. Such communications are intended to shape (part of) their future.

This system of expression often creates a rather chaotic and unpredictable (in terms of best options) results.

By adding a system of setting and ranking priorities, and accepted by participants, will by its very nature bring order to chaos.

What will the future look like for local democracy? Nobody is able to predict developments like the input of IT, referendums and direct democracy. Scenario planning though is an instrument capable of diminishing the risks accompanying the future. Wybren Meijer and Pieter Pijlman (Futureconsult) have been challenging institutions and governments and managements with future scenarios about these challenges. They will tell about the experiences in mapping the future of local governance in the knowledge economy. In addition they will show what scenario techniques and instruments they used and what the outcomes were.

John Grüter
The panel is followed by an open discussion.

Dr. Joop de Wit is an anthropologist teaching as Senior Lecturer Public Policy and Development Management at the Institute of Social Studies, The Netherlands. He also taught at the Institute of Housing Studies in Rotterdam, and worked with the Netherlands Ministry of Foreign Affairs as programme advisor urban poverty alleviation, and as Institutional Development Advisor. His regional interest is in Asia (India, Vietnam) but he also worked in Ethiopia, Namibia and South Africa. His key interests include (urban) governance, urban poverty alleviation, decentralization and community dynamics. He obtained his PhD at the Free University, Amsterdam (‘Poverty, Policy and Politics in Madras Slums; Dynamics of Survival, Gender and Leadership’ – Sage, 1996).
www.iss.nl

Oebele Bruinsma has a background in behavioural biology. He has worked both in public, including science, and private organisations. As an international consultant he is involved in industrial innovation and the driving processes of decision making underlying it.

He draws his inspiration both from nature and music which he considers both as ultimate expressions of knowledge management. He lives in the Netherlands.

Wybren Meijer studied International Relations (BA/MSc) and Policy and Governance (BA/MSc) at the University of Amsterdam and the University of Sussex (UK). His graduation in IR was on the futuremapping of the Argentine junta on the eve of the Falklands War. His P&G master thesis was on the sustainability of democratic arrangements in war-torn countries. Since 2004 he joined the Futureconsult Scenarioplanning office in Amsterdam. At this position he developed scenariostudies and moderations for institutions, companies, political parties, schools and ministries.

Pieter Pijlman studied European Studies at the Faculty of Humanities (MA) of the University of Amsterdam. Pieter Pijlman was board member of the Amsterdam Student Union on behalf of the student associations and initiator of the biggest annual student event of Amsterdam, the UVA Cultural Festival. Pieter Pijlman has been working at the Futureconsult Scenarioplanning office since 2004. Next to his employment as junior advisor at Futureconsult Pieter currently teaches at the Academy of European Studies and Communication Management of The Hague University. Currently he coordinates a research project on the involvement of youth in politics in Europe.

While studying psychology (language-orientation) at the Free University in Amsterdam, John worked part-time as a computer operator. Combining both activities in 1981 he joined a large social security orgisation in the Netherlands with a department created to introduce state of the art on-line database processing. In 1984 he joined the Dutch subsidiary of a US consultancy company as a systems architect, involved in the most research intensive projects building leading edge applications such as graphical user interfaces to large-scale administrative systems, integration of administrative and manufacturing systems, dedicated portable hardware/software to decentrally monitor critical components in chemical plants, and a logistical tracking and planning system using state of the art satellite communication and localisation. In 1990, with two colleagues he founded a consultancy, but left that after three years to join a large Dutch ICT Consultancy, where as a business architect he did many projects involving business process re-engineering, exploiting emerging information technology. In 2000 he joined an e-Business Architect that collapsed when the ‘New Economy’ bubble burst. In 2001 he started Digital Knowledge (www.digital-knowledge.com) dedicated to developing and introducing new business concepts and approaches in medium scale organisations. Currently he is involved in several projects using web-based semantic technology, helping companies to leverage the value of their unstructured information. Recently John teamed up with VISH (www.vish.nl). VISH and Digital Knowledge use Vish & Chipz (www.VishAndChips.com) to explore unconventional societal and business issues. John has entered the McKinsey new business management contest (www.NewVenture.nl) twice, once with a knowledge management product for students (memory bank for students) and recently, with Vish & Chipz, developing a product/service for emergency situations (escapePod). John was born in Australia and now lives in the Netherlands.
www.digital-knowledge.com