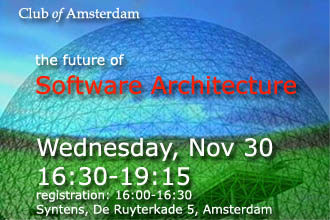 Maarten Boasson
Do we want to keep software architecture alive?

Like so many other interesting and useful concepts in the short history of software engineering, architecture is in danger of losing its meaning and becoming nearly synonymous with software engineering itself. This process is already happening and it may be too late to try to rescue the term. Regardless of what the term “architecture” will come to mean, the activity of designing the structure of a software system will always be crucial for successful development of such systems.

Engineering being the wrong analogy for the development of software, we will have to find new ways of thinking about software development. It is conceivable that either a different analogy, or a totally new concept can be formulated that does not suffer from the fallacies of the engineering analogy and can be sustained over a long future.

This presentation will discuss new possibilities concerning the use of ‘web 2.0 technologies’ for building the virtual communities of the future. The focus will be on a project called ‘GridThinking’, which I started to explore the possibilities of ‘collective brainstorming’.

Companies are more and more focusing on their core competencies. This results in outsourcing (part of) the activities or processes that are less strategic. Outsourcing IT is been going on for some years now, but outsourcing sales processes, or all HR-processes is a new and fast growing activity. These changes require adjustments in the software infrastructure to be able to integrate internal and external system, that support these process.

Coffee break with drinks and snacks.

Part II: Panel with the Speakers

Maarten Boasson studied mathematics in Groningen and computer science in Maastricht, the Netherlands. He started his career over 35 years ago with Hollandse Signaalapparaten, a defense contractor specializing in naval systems. He became involved in advanced studies aiming at control of complexity, both of the development process and of the system under development itself. This resulted in the creation of a novel architecture for distributed reactive systems, that has been applied successfully in numerous systems and is, more than 15 years after its introduction, still unsurpassed in its support for integration, fault tolerance and component reuse, in particular in combination with high performance. Using this architecture, he developed a radically different approach to proactive systems, in which simulation of explicit models replaces the traditional encoding of behavioral knowledge in data processing algortithms. This approach promises interesting possibilities in the areas of decision support, training integration and further reduction of development cost. In addition, it obviates the traditional distinction between simulation and operational system, allowing smooth transition and complete integration of simulation and real-time, operational system. In 1996 Boasson was appointed professor of computer science at the University of Amsterdam, where he holds a chair in Industrial Complex Computer Systems. In 2000 he left Signaal and started his own company, Quaerendo Invenietis (see www.quaerendo.com), providing advise to numerous companies on issues of research and systems design and engineering. He was involved in the organization of numerous international conferences, played a major role in establishing a Dutch national research programme in embedded systems, and is co-founder of the Para Limes Institute for interdisciplinary research (see www.paralimes.org).
www.science.uva.nl/research/arch

During his study on ‘Communication and Communication Systems’ in 1994, Maarten took part in a project to build one of the first websites for selling dance music on the internet. This was 10 years too early…

After finishing his study he started working as a web developer and consultant on the field of E-Commerce and web portals. Currently he’s a advisor and business owner that focuses on Business Performance Management, Business Intelligence, Presence and Collaboration.
www.bpmi.nl
www.gridthinking.org

Bert Oosterhof is Director of Technology EMEA at Informatica Corporation, a supplier of Enterprise Data Integration software. Before joining Informatica he worked as technical director at syn-T-sys and Do~IT, both companies that focused on distributing new software technologies in the Benelux. Prior to this he has been in several technology related jobs, varying from Product Marketing Manager at Ingres, to Software Engineer at Cullinet software.
www.informatica.com

Karel van der Poel is a roundtable member of the Club of Amsterdam, an independent international thinktank that focuses on the future of the knowledge society.
www.mirror42.com