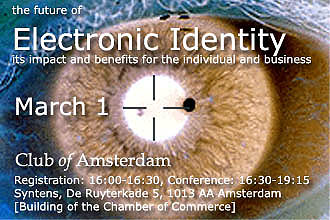 Jan Willem Broekema: ID by Law – Is the European Directive valid in 10 years?

Dennis van Ham: Electronic identity: are you (proven) in control?

Marcel van Beek: Preview of the self service airport

Jan Willem Broekema
ID by Law – Is the European Directive valid in 10 years?

European privacy is, as far as informational privacy is concerned, protected by the European Data Protection Directive 95/46. Well, in fact it is not. What does the directive do and will it be of any use in 2010 and onwards?

Both the private sector with its interest in databases and the public sector, mainly with interest in fighting fraud, have reason to circumvent the directive and the national laws that result from it. Will privacy be of use in 2010 on the internet and should it? What if and what if not?

Is there a reason for concern? Do you have any privacy anyway on the internet?

Dennis van Ham
Electronic identity: are you (proven) in control?

From a technology perspective identity was not integrated in the design of the Internet. How do you know who and what you are connecting to? In order to solve this problem we have a patchwork of solutions, some of them work and some of them don’t. From a business perspective today’s enterprises are involved in fierce competition. Information has become a critical asset. And so has the protection of this information. To put it briefly: ‘who do you give access as an organization and who do you want to keep out while having a system that is practicable and verifiable?’ Furthermore from a social perspective we see a criminalization of Internet. Attackers (of our electronic identities) have become more professional and pose a real threat to the further growth of Internet (and its economy). And last, but certainly not least, from a regulatory compliance perspective organizations are increasingly required to prove who is having access to what data and how this guaranteed.

In his presentation Dennis will talk about identity as a strategic business issue and associated trends in Identity and Access Management (IAM).

Marcel van Beek
Preview of the self service airport

– Vision of the self service airport,

– Integration of security and border control,

– The migration to electronic identity,

– Passenger profiling and enhancing the identity.

Homme Heida, Promedia, Member of the Club of Amsterdam Round Table
16:45
Part I:

Homme Heida
The panel is followed by an open discussion.

After finishing his degree at the Mathematics & Science Faculty of the University of Leiden in 1982, drs Jan Willem Broekema has operated primarily in the area of the social effects of technology on people and organisation and vice versa.

In 1982-1983 he worked as scientific researcher for the province of South Holland. In 1984 he started to work for Grote Beer (“Ursa Major”, now a brand of Exact Software B.V.). Grote Beer develops and distributes administrative software for small and medium enterprises. In 1994 he was asked by high tech company Tensor Technology, building remote vehicle tracking systems for (postal, high value and courier) transport services. After a short period in 1996 at market research bureau International Data Corporation he joined CapGemini in 1997. His major accomplishments as senior managing consultant have been creating awareness for the social effects of the introduction of new technology and media, more specifically internet and intranet, on business and the daily life of citizen, employee and consumer. In 2002 he was royally appointed commissioner and vice president for the College bescherming persoonsgegevens, the Dutch data protection authority CBP.

Jan Willem Broekema worked in projects in both the private and the public sector. He is author of articles and books (e.g. on telework, on the history of internet, on the influence of intranet and knowledge sharing), requested as guest speaker and as forum participant. He is frequently asked by the media, providing interviews for magazines and national newspapers, radio and television.
www.ososs.nl

In 1993, when the renowned Netscape browser arrived (symbolic for the introduction of Internet to the general public), Dennis enrolled as a student at Tilburg University (Katholieke Universiteit Brabant). At the time this particular university was well-known for its innovative library and student facilities. Consequently, while taking up classes Information Management (Bestuurlijke Informatiekunde), Dennis became fascinated with the potential of Internet. Inspired by the famed cartoon ‘on the Internet nobody knows you’re a dog’ (1993, The New Yorker) he graduated with a thesis emphasizing the need for authentication and non-repudiation to assure trustworthy E-commerce. This thesis was written while Dennis was already working for KPMG.

Then in 2000 he joined start-up company Escador / Idea Factory where he worked as a consultant and innovation analyst (e.g. developing future E-commerce scenarios for clients). His next step implied working in a more technical IT-environment, PinkRoccade, and a former customer of Dennis. As a product manager he was responsible for the development of a new IT-security service where he combined existing datacenter capabilities with emerging technologies in the field of logical access control.

After four years at PinkRoccade, Dennis is as of December 1st 2005 back at KPMG where he works as a consultant in the Information Risk Management practice. Dennis is 30 years of age, lives in Amsterdam and enjoys reading, traveling and playing golf.
www.kpmg.nl/irm

Marcel van Beek is responsible for the development of an automated passenger proces (using IT-technologies such as data protection, biometrics, etc.) at Amsterdam Airport Schiphol for almost seven years now. The first three years as a consultant and since 2002 as an employee of Schiphol airport. In July 1999 he started with the complete design of an automated border control for Schiphol. January 2000 he finished the design and became responsible for the realisation of eight of these installation at Schiphol Airport. Automated border control was launched in October 2001 as a feature of the Privium frequent flyer program. From that moment Marcel went on with newer developments on identification and verification of airport users such as staff. One of his projects was the development of multi-purpose ID-cards for 72.000 staff members working at the airport, based on the newest technologies. These new ID-cards, including iris-patterns for biometric verification, are protected with high secured data storage and distribution. This to avoid duplication of ID-cards or identity fraud. He is also involved in setting up pilot- and evaluation-projects using the latest technology biometric passports, which will be launched in some EU-countries at the end of 2006. Since December 2004 he is responsible for the program “Redesign Passenger Proces”, the vision and strategy for a “self service airport”, implemented between 2010 and 2015.

Marcel started working in ’89 for Daimler-benz industrial automation for more then 8 years. He pursued his career as an IT-consultant for CMG for more then 4 years and is now for more then 3 years working as employee of Schiphol airport.
www.schiphol.nl/privium

Homme Heida has a continuing interest in a more philosophical approach of ‘being there’. His views on the future are very much based on new technologies. “Humans change only slowly by evolution. Technology will speed it up”, he argues. His credo is: ‘living body and soul’, which means to him a sportive challenge as well as an intellectual one. From the Amsterdam marathon till the Club of Amsterdam.
www.promedia.nl