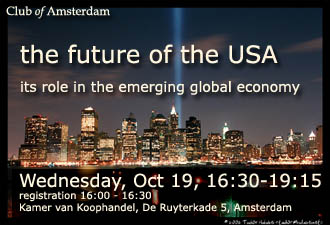 The U.S. and the Emerging Global Economy
“Good Globalization – Getting There from Here”

Since the end of the Second World War, global economic integration has helped to bring unprecedented increases in wealth and income and has lifted hundreds of millions of people out of poverty. But globalization remains controversial, and its continued progress is not assured. What are the key challenges, both for the world in general and for the U.S. in particular, that need to be addressed so that this process can continue?

By far the biggest advantage of the US has been the size of its economy more than anything else. In this case size is all about power. And size is of vital importance in the global economy and diplomacy. This combined and huge energy of all what the US economy stood for brought them unparalleled prosperity. But today it seems that the US must pay to keep this size (debt). Or is it that the US invests in its future today? Or can’t it afford to invest in its future because it has trouble in paying for today already? How do today’s developments already decide its future. Or has its future already been decided on?

There are some choices to be made …

From world dominance to world leadership

From a bare bone continent to world dominance in 200 years. How did they do it? Where, if at all, does it stop? What lessons are to be learned and what examples did the rest of the world get from the USA under the current global economic equilibrium shift to Asia.

What will and has to determine the Future of the USA in the next decades and how could we all prosper globally from its past as well as current lessons in the new directions the world gets reshuffled economic wise.

Homme Heida, Promedia, Member of the Club of Amsterdam Round Table
16:45
Part I:

Richard Huff is the Counselor for Economic Affairs at the Embassy of the United States in The Hague. Mr. Huff joined the Department of State in 1983 and has worked in U.S. Embassies in Germany, Nigeria, Israel, and Poland, as well as in several positions in Washington. Prior to joining the Department of State, Mr. Huff was a financial analyst with the bank regulatory division of the U.S. Treasury Department.

Mr. Huff holds degrees from Harvard and Princeton Universities. He is married and has two daughters.
www.usembassy.nl

Before joining Maes & Lunau, Hans Langeveld was Managing Vice President of Korn/Ferry and held co-responsibility for the European Technology Sector. Before that, he was Senior Vice President at KPN Telecom NV with responsibility for the Business Market Division with 3,000 personnel. A large reorganisation was carried out under his leadership at this division. Also at KPN he was a management member of the Corporate Accounts Group, responsible for large contracts in the government area.

Hans Langeveld served as a General Manager of a KPN Telecom NV region. He was involved in creating the AT&T/Unisource joint venture and served as a liaison to the international executive board of the Unisource Partners. Also at KPN – Telecom, he was Managing Director of a joint venture between KPN – Telecom and Getronics Holding NV, where he successfully acquired a contract for a national mobile network for the Dutch government.

Langeveld is a Non-Executive Director of a Venture Capital Fund.

Peter has over 25 years of on the ground success in building multi-billion-dollar enterprises in China and throughout the Far East.

Peter is a global authority on Knowledge Brokering and works at the core of the world’s vast globalizational change aspects focussed on the current economic equilibrium shift to Asia. His leading networks of international experts work within High Impact Teams on earned value programmes and creating sustained market presences in new rapidly emerging markets.

As one of world’s most pragmatic ‘cut the chase’ consultants he has a global reputation in business strategy and business flow architectures as well as change in integrated business alignment projects.
www.acfce.th.com

Homme Heida has a continuing interest in a more philosophical approach of ‘being there’. His views on the future are very much based on new technologies. “Humans change only slowly by evolution. Technology will speed it up”, he argues. His credo is: ‘living body and soul’, which means to him a sportive challenge as well as an intellectual one. From the Amsterdam marathon till the Club of Amsterdam.
www.promedia.nl